We should go to prayer with deep humility and an awareness of our nothingness. We must invoke the help of the Holy Spirit and that of our good angel, and then remain still in God’s presence, full of faith that he is more in us than we are in ourselves.
– St. Jane de Chantal 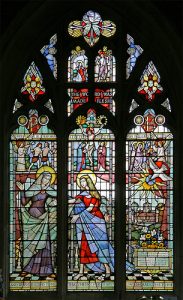 Salesian spirituality, the essence of Visitation, is about forging connections heart to heart. It’s about infusing every interaction, every encounter, every moment with the simple virtues of patience, humility, gentleness, simplicity, honesty and hospitality. It’s about Living Jesus.

Visitation Heart and Mind is both a prayerful space and a special place. It’s where we meet soul-to-soul in prayer and contemplation, and it’s where we meet person-to-person to nurture our heart-to-heart relationships.

Jane’s Place is part of the first phase of the Visitation Heart and Mind plan. Designed to have a coffeehouse feel and atmosphere, Jane’s Place is a space of warm welcome and Salesian hospitality in the spirit of Saints Jane de Chantal and Francis de Sales.

St. Jane de Chantal was a devoted mother and wife who, after losing her husband in a tragic accident at age 28, promised to dedicate her whole heart to the service of Christ. She did not initially understand how her vow was to unfold. Over the next ten years, Jane grew in her spirituality as she realized and embraced God’s loving will for her. She became the first Visitation Sister in 1610 as she and St. Francis de Sales founded the Sisters of the Visitation of Holy Mary. Eighty-seven Visitation Monasteries were subsequently established before Jane’s death in December, 1641.

Throughout much of St. Jane’s life, she opened her own home to the sick and the poor. First, as a married woman and widow from her own home, Jane offered food to the hungry and ran a small apothecary for those in need. Then, in the early days of her religious vocation, Jane ministered to the surrounding community of Annecy, France, with her first Visitation Sisters. Jane extended compassion and kindness to guests and strangers alike. These acts of genuine charity were the roots of Salesian hospitality.

Read and reflect upon the writings of our founders St. Francis de Sales and St. Jane de Chantal with others who share an interest in studying Salesian Spirituality. No preparation is necessary!

Please join us as we pray for the intentions of our Visitation Community.

Meets every 4th Wednesday of the month while school is in session.